It’s too bad residents in Edmonton & Calgary had to work alone so many times after crime struck their lives between April to June.

For example, here are some boats reported as stolen in Red Deer County. 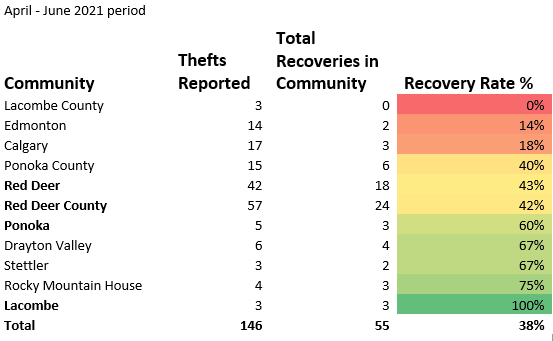 This means criminals won more often than they should have.

Here is what anyone in Calgary, Edmonton, or your community, can do to help keep property and loved ones safer today.

Most thefts are reported 12 hours after the fact. SiteSafe allows someone to report within 5 seconds by sending an email from their security camera system. Alerts created in less than 1 hour from the incident on Lightcatch get over an 80% recovery rate!

The faster and clearer reports come to Lightcatch the better the police can get clear information from the community. Use Crime Blocker to connect to Lightcatch via email for only $10/mo.

3) Report any suspicious activity on Lightcatch right away. Always create a report with the police department as well. Doing both reports online takes just 5-10 minutes. The communities that get the best results create a LOT more suspicious alerts than other areas. People in these communities actively try to reduce crime by keeping a spotlight on any suspicious actors as they are moving around.

If these two cities, Edmonton and Calgary, could have had more people using Lightcatch, theft victims would have gotten a 40% recovery rate, and there would have been at least 7 MORE stolen items recovered by the police. Those 7 people could use more help!

If every one of those 316 items that could have been recovered saved citizens, insurance companies or policing $10,000 that would be $3,160,000 of stolen items back in the hands of honest people over those 3 months.

The potential savings to people of these cities is much much higher than $3.1Million. For when a property criminal gets away with stealing a vehicle or a boat or a bicycle there is feedback to that criminal they can keep going.

But when 20, 30 or 100 people spot something and track their movement until the police arrive, there is a different kind of feedback. Feedback that can be described as similar to turning on the lights in a room full of cockroaches. Just as the cockroaches scatter criminals scatter.

Last year, in 2020, Red Deer saw their vehicle theft rate drop 41% while the national average only dropped 25%. Calgary barely dropped over the same period. Hundreds of citizens have paid the price of crime in too many places. It’s time to stop the needless expense. Download Lightcatch today and protect your community.

If every community was as effective as Red Deer and Red Deer County the amount of stolen goods criminals would lose back to the police would be in in the tens of millions or more.

Be part of helping friends and families be happier. Help keep your community 1 step ahead of property criminals by being prepared with Lightcatch before a crime happens to someone you care about.