Getting the name of a suspect is useless

Monday, Oct 7 I got a call from Katie. Her case had been closed in court the prior Thursday and we hadn’t had a chance to speak yet. She told me that all charges against ‘Buddy’ K were dropped in court. Right at the end of the day as his case was scheduled to be heard, she learned the case would not go any further. It was so discouraging to speak to Katie, knowing all she had gone through.

Over our prior calls I had learned that several RCMP members had told Katie that Buddy had numerous charges for property crimes, not just her items. They had waited months for this important court date. Katie had taken the day off work to be present as a witness.

One person who was subpoenaed to appear in court did not appear. That witness seen the thief in Katie’s vehicle just before the police recovered it. Despite the many other stolen items in his possession and multiple arrests, ALL charges against Buddy were dropped that day because of ONE missing witness. Buddy is back on the streets.

Many people in her town know Buddy as a repeat offender who has been seen in or around scores of property crimes. Katie knew for sure he was involved, as she saw him in her stolen vehicle.  His name has been smeared publicly several times as a suspect and it hasn't seemed to slow him down at all.

On the day Katie took off work to attend court the Judge got paid, the Crown prosecutor got paid, the defense lawyer got paid, even the RCMP members attending got paid. Katie lost money after taking the entire day off.

Buddy has cost Katie over $3,000 she estimates. Plus the cost of some restless nights. No one in the judicial system had any costs like Katie did. In fact, they all made money off of Katie’s losses.  The financial incentive for people in the judicial system to get something done for a crime victim, because we get a name doesn't exist.

So many try to get the name of suspects

We see hundreds of people try get some satisfaction after a crime by attempting to ask ‘Who is this?’ on social media. Their hope is that by somehow getting a name something will happen. This could not be further from the truth. The name of the suspect is worthless.

World Renowned Crime Experts are trying to warn us

...there is a lower risk of detention and conviction in Canada than in any other country in the world, including the United States and in Europe. We have this tendency to bargaining down sentences, bargain down to a lower sentence in order to avoid the cost of long trials.

This statement is providing important clues every property owner can use to have the legal system work to their advantage. He is saying:

• Evidence has to be completely one sided, so there can NOT be a long trial
• If there is any chance of a lower sentence or plea bargain the entire SYSTEM can turn against you, the victim.

Having their name public is like a ‘Badge of Honour’

After watching people get their names splattered all over social media, like Buddy's has been, we learned a surprising result. The criminals don’t think like people who obey the law. The don’t care if they are embarrassed with their name exposed. They like it!(1)

The reason why criminals get into this kind of thing is because not only did they rip someone off, now they are famous in their social circles as ripping someone off, making many people mad, AND getting away with the whole thing.

By getting a name without any real charges my observation is you are probably making the situation worse for the next person. The criminal knows if they keep going they will probably get away with it. The worst outcome in most of their cases is they will just have the stolen property seized and that they may spend a few days in prison until the courts release them. Once released they are free to go brag up their exploits.

What we’ve seen over and over is that the few cases that capture decent video of the thefts, and then get that footage into the public immediately, tilt the entire system in their favour. The public, the police and the criminals connections all become influenced by an immediate, clear and forceful reaction.

A real example we seen worked like this. Good video encouraged someone’s aunt to report the location of their nephew’s stolen goods. He ended up with an immediate arrest, no bail, and a 6 month sentence. A picture of the stolen item will never get that criminals auntie to do anything.

If we think of the unfortunate death of George Floyd in the US in the summer of 2020, the overwhelming reaction was because of the video. The names of who the police were was secondary. The video created the emotional reaction with the public and with the lawmakers.

The courts are also influenced by conclusive video and an immediate arrest. No Judge or Crown Prosecutor wants to be exposed as not doing their job when the evidence is so overwhelmingly one-sided.  That exposure could turn into bad press about their ability to do their job and end up costing them money and reputation.

The only way to leverage the power of video on your property is to be ready in advance.

I created a free homeowner self assessment to help close all the security gaps we seen criminals take advantage of over and over. To see if there are gaps at your home go to score.lightcatch.net

'Katie' who went to court to see the charges dropped

"That is very good and true"

"Hi Darren, I read the article and cases like Katie's is something I've seen a lot in Alberta for the last 10 years.

I know its been going on much longer than that. It's important to find out why all charges get dropped, but even the explanation given sometimes doesn't make sense either.

Leave victims and witnesses angry and with no justice for their losses.  Also makes them less likely to call police next time and opting to take matters into their own hands. Hope this helps, happy Thanksgiving. "

"Thats a good read well done.  Allowed to share this?"

Random Samples of people trying to collect names of the culprits.

Asking for a name, 4 days after the theft.

This is too slow when the entire community nearby is packing a phone in their pocket to tell the police which way the thieves went in real time! 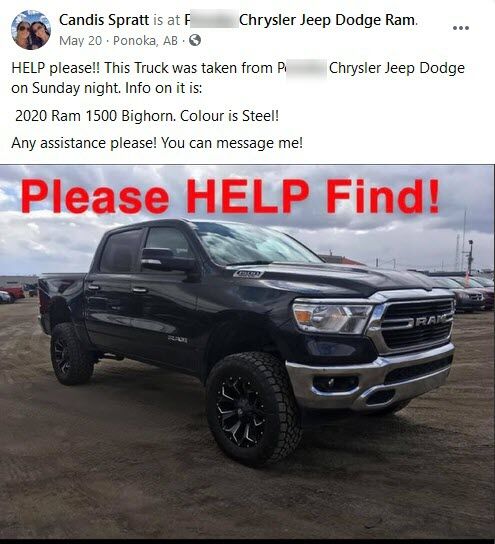 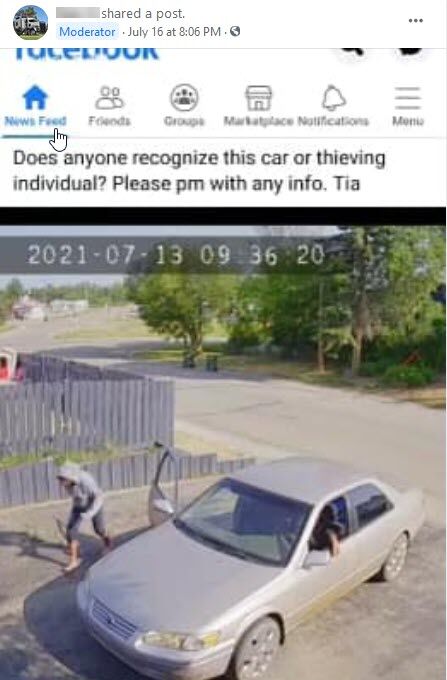 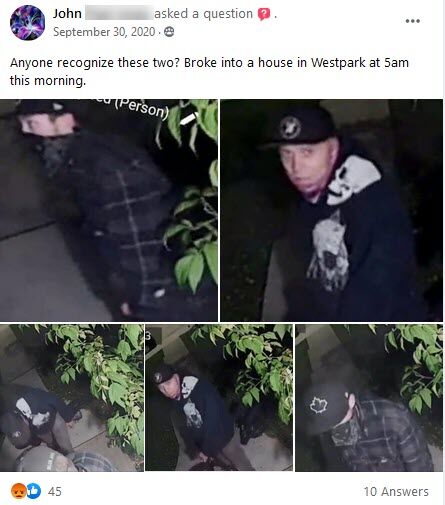 Trying to collect name of a rural property crime, 3 days after the break in.

Trying to collect name of a suspects at 3pm, 10 hours after the break in.

Contact Lightcatch if you want this done for your property.

This business below was closed when it was robbed by these two.  Thousands of dollars of damage could have been prevented with the right security system.  They asked for the names of the suspects several days after the fact. 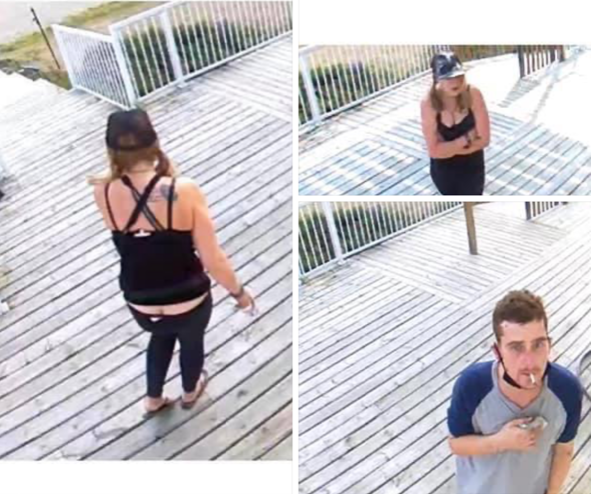 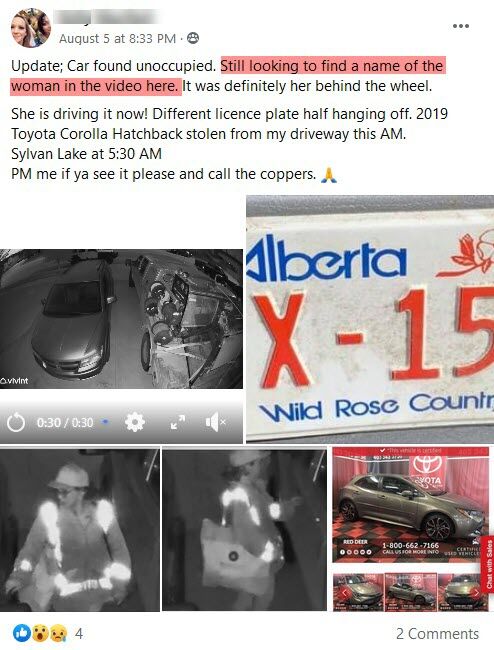 (1) I'm reminded of a video documentary of Bernie Madoff, the Wall Street Hedge fund manager who ran a fraudulent fund for years.  A commentator in the documentary felt Bernie would probably enjoy watching the documentary about his crimes while he was sitting in prison, that he would like the attention on his exploits.

This is a different mindset than the average citizen who was astounded how a shyster could deceive so many wealthy people for so long.  We would be emberassed and ashamed.  The commentator felt Bernie would feel good about the exposure.