Pointing The Finger of Blame on 23+ Stolen Vehicles

A recent recovery of 23 stolen vehicles on Aug 4 in the city of St. Albert highlights one the main reasons why some regions are chronically affected by crime while other places remain remarkably safe.

The difference between living in one of the highest crime versus one of the safest places can be dramatic. This chart below uses police data from July.  It shows safer places can have 10 times less crime. 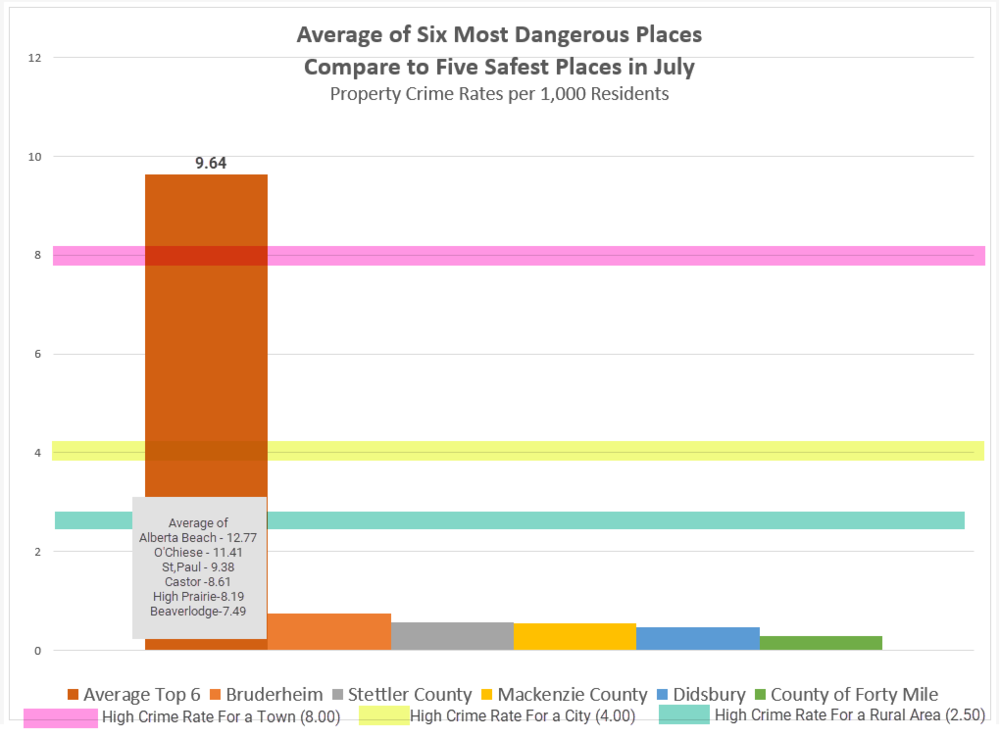 Imagine, if the place where you lived was ten times safer!

All of this and more is possible. With just 5 minutes per week the movement can happen sooner rather than later.

The story says the arrest happened because the police showed up at the location as it was the last known GPS address of a stolen vehicle. When they arrived there were lots of vehicles on the property but they didn’t see the one they were looking for. The next day they arrived with a warrant and seized over $1 Million in stolen property. Who knows how many millions came and went before they made this arrest.

At this point I have to stop and ask ‘C’mon, there were shipping containers filled with vehicles, there were 23 stolen vehicles at the time of the seizure, the police suspected something as soon as they got there, there was material to change the VIN of a vehicle at the property so this had been happening for a while, AND this was right under everyone’s noses nearby the whole time?’

How could no one in the area have never reported anything, even once, as suspicious?

Obviously, this wasn’t in some secret warehouse if the police could see so much sitting on the road outside the property.

Too many people in high crime areas never report anything until they are a victim. This is a very different level of skill than in low crime areas. In safer areas people are far more proactive in reporting anything they don’t feel is quite right.

You should see how fast and professional some residents can be in some of the safest places! In fact, them being so active while the crime rate was very low was one of the things that made me want to study crime rates.

I kept thinking ‘If the people in places like Fort Macleod could only see how much worse crime was in some of these cities they would never complain again.’ Yet, I was wrong in this idea.

It is actually the attitude of the people that keeps them from allowing their community to turn into the next cesspool for crime.  They act long before dozens of people get hurt.

Creating suspicious activity posts on Lightcatch, so multiple people can confirm the same thing, and then together they can all be multiple witnesses contacting their local police service with this information, is one of the fastest easiest ways to change the safety level of where you live. This should take about 5 minutes per week, with most weeks taking nothing and maybe sometimes being involved for 10 or 20 minutes as alerts on the app come in.

This is a good case study because the County surrounds the City of Grande Prairie. The City, inside the County has maintained one of the highest crime rates in the province.

Here is the ranking in the month of July, as well as the crime rate per 1,000 residents for the two.

How one region supporting the principles we teach at Lightcatch can be one of the safest, while it is being constantly threatened by crime coming from one of the most dangerous places inside it’s borders seems to make a strong case of what is possible.

Not even the vocal people in the safest places like Fort Macleod, Nampa, Parkland County, and County of Forty Mile can make a claim like the County of Grande Prairie can!

Here is the article about the arrest in St. Albert.
Man facing multiple charges after stolen vehicles found in St. Albert, Montreal
https://edmontonjournal.com/news/crime/man-facing-multiple-charges-after-stolen-vehicles-found-in-st-albert-montreal

Want to get the police involved to prevent crime near you faster than any other method?

Then this is exactly what you've been looking for! Free.
https://www.lightcatch.net/download