Rural crime is easier to stop when home owners avoid these crippling mistakes.

Here is a recent example where a homeowner was awake just after midnight on a warm summer Friday night. Looking out on the road he noticed something strange. In the truck he noticed, people would shine a large directional light down each of the driveways and into the yards.

No one with good intentions shines lights down someone’s property in the dark.

The wrong way to deal with this kind of threat is to call the police the next morning.

There is no real benefit to giving potential criminals a head start of several hours so they can get away. What good can any police officer truly do, knowing there once was a truck at that location but that was several hours ago.

Calling the police hours after the fact shows by someone's actions they don’t really care. If it was their child or their property at risk, would they also wait several hours before asking for police presence? Certainly not.

Waiting is a mistake that gives criminals the impression ‘no one cares around here’.

The rural homeowner who saw this activity was up at 5am and sent a text out to everyone about what he saw.

Putting a text out at 5am to a local community group has the following problems.

Criminals don’t stay with group borders. Property owners are at risk when they limit themselves to getting information to just specific group areas or specific group members.

After seeing this alert on social media it was put on the Lightcatch app Saturday morning. Lightcatch helped generate a lot of effective information regarding scoping yards at other locations that night. The screenshot below shows how people responded. 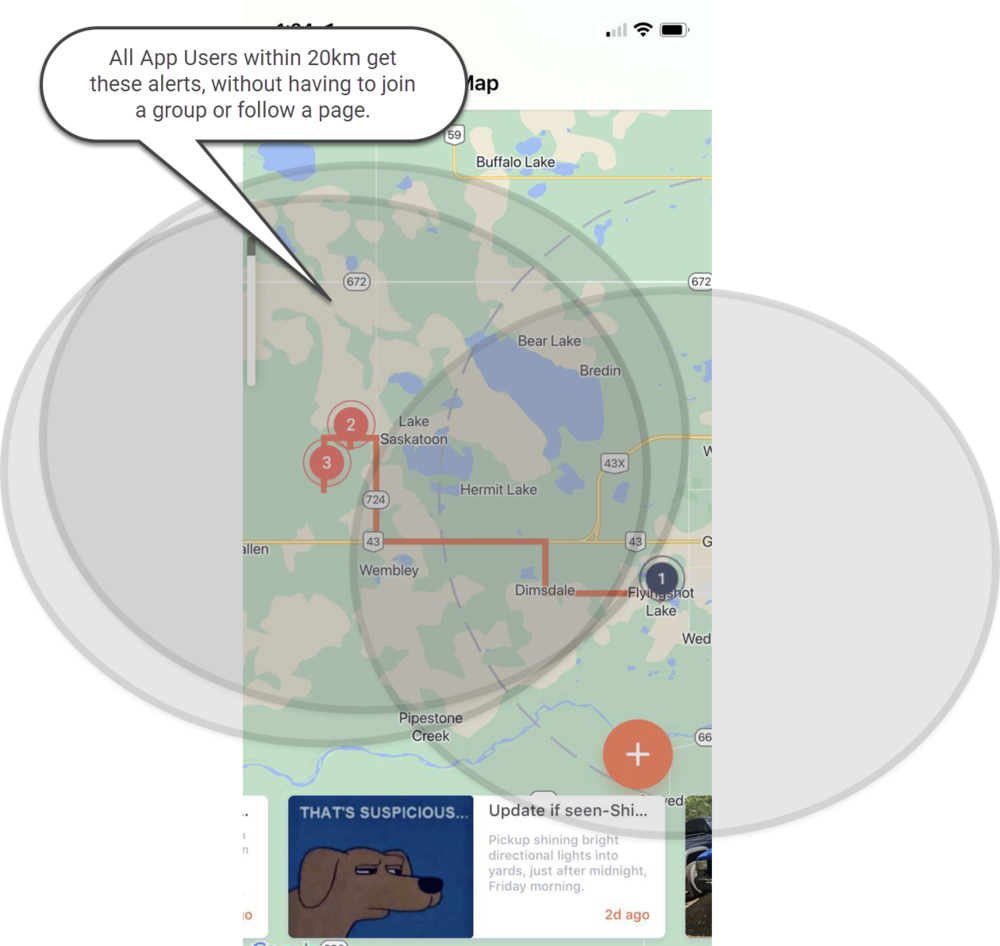 1. When the alert is created other users with the Lightcatch app sees that notice as a black dot on a map. If the user doesn’t happen to know where ‘Down Range Road 64 and north of 711’ actually is, they don’t need to. People who aren’t good with directions can still get value from the information that is shown.

2. The user seeing the alert can also see how close that notice is to their location, their work place, their home, or some other place that is important to them. If the black dot with a 1 is close to one of their friends or family, the user can better help communicate to those people something is taking place.

3. The app alerts everyone within 20km. The communication is borderless.

4. By using a borderless solution others outside of the borders can be notified. In this case, two homeowners over 29km away, had the exact same things happen near their property on the same night. 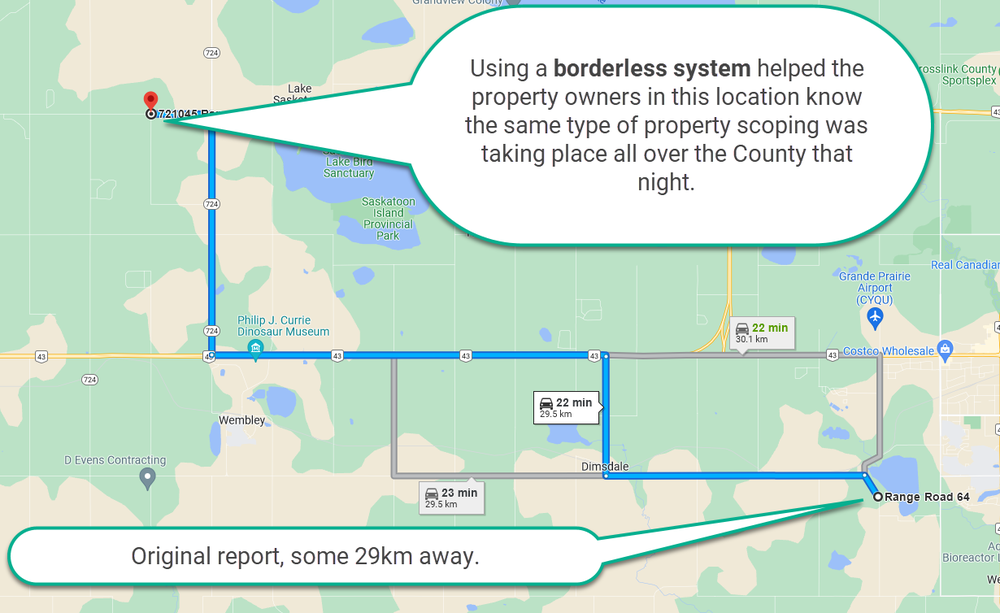 5. By providing all of these reports to the RCMP there can be proactive patrols in those areas.

As soon as this vehicle was seen it could have been placed on Lightcatch and 911 should have been called. Anyone living in that area could have helped keep this vehicles location updated until the police arrived. The difference between waiting 5 hours and doing it immediately can be dramatic.

If others had seen the vehicle that night, and provided updated locations, there is an even better chance the police could have pulled the vehicle over.

By pulling over a vehicle while it is still involved in activity like this, there is a much stronger message to potential criminals they are being watched. If there is a large light in their cab and the officer tells them a truck matching their description was seen shining a light into yards it can become a very uncomfortable conversation, even if all they get was a warning.

The criminals would learn that people are watching them after the police stop them once or twice.

Most rural homes robbed after midnight do not have an effective way of warning them a thief is on their property before the crime occurs. Having a clean security system can protect people and valuables while they are sleeping.

With a clean home security system there is an alert the minute someone enters that property. That alert reaches a call centre which can contact the property owners or people on the property owners escalation immediately. This method ensures no one person becomes a failure point that can collapse the safety of the property. Once someone has been contacted, their first responsibility is to view their security cameras and verify if the alarm is real or not.

If the alarm is real and a vehicle is trespassing their should be a loud audio alarm go off.  911 should be called. The loud siren and the likelihood of police lights appearing are some of the best deterrence methods there are.

The police officer responding to this incident should be able to view a colour picture of the vehicle trespassing while enroute to the area. The same vehicle should also be communicated far and wide on channels like Lightcatch and social media.

When audio alarms go off, a police presence appears, and the vehicle used becomes widely circulated all within five minutes of trespassing the criminal is likely to feel that trying crime in that area is really hard. That is the perfect outcome.

When property owners get the police involved immediately, rather than hours later, they are sending a strong clear message to other home owners in the area ‘I am going to do everything I can to help keep our community safe.’ If others so the same, the effectiveness of that message gets multiplied.

Criminals see and hear how easy it is to do crime in one area versus another. When crime becomes easy that becomes a natural place to target over and over again.

Lightcatch users, Beaverlodge Rural Crime Watch and the County of Grande Prairie have helped make this County one of the safest in the province, relative to its size and economic profile. To see a comparison of how much safer the County of Grande Prairie is to its peers here is a recent report. https://www.lightcatch.net/blog/which-regions-and-places-of-alberta-had-the-highest-crime-in-june

To see where your property may have gaps that criminals will use to get away with crime I’ve created a free quiz - score.lightcatch.net