These arrests below broke up a little party a group of 6 criminals were having with Alberta homeowners all year. None of the homeowners knew they would soon face a den of thieves.   Homeowners ended up  angry, threatening revenge but on the losing end every time.

The thieves just toyed with most of them. 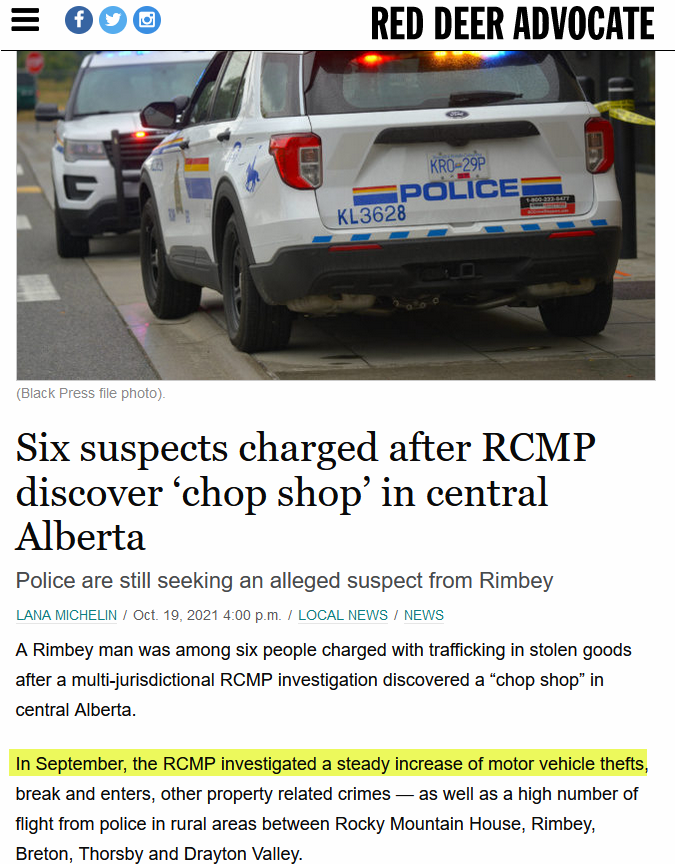 Everyone at party ‘thought’ they could handle it

The release goes on to say

‘Upon executing two search warrants in the Breton detachment area, a total of 19 vehicles, three watercraft, one motorcycle, two snowmobiles, one all terrain vehicle and two vehicle engines were recovered.’

Reading between the lines of the media release, clearly this criminal party was ongoing for months.

In fact, here is one example of a stolen vehicle where the suspects stole it and then lost it to the RCMP. This theft was recovered right in the same area the property was seized. This took place May 25, 2021, 6 months ago, not one month ago, like the article states. 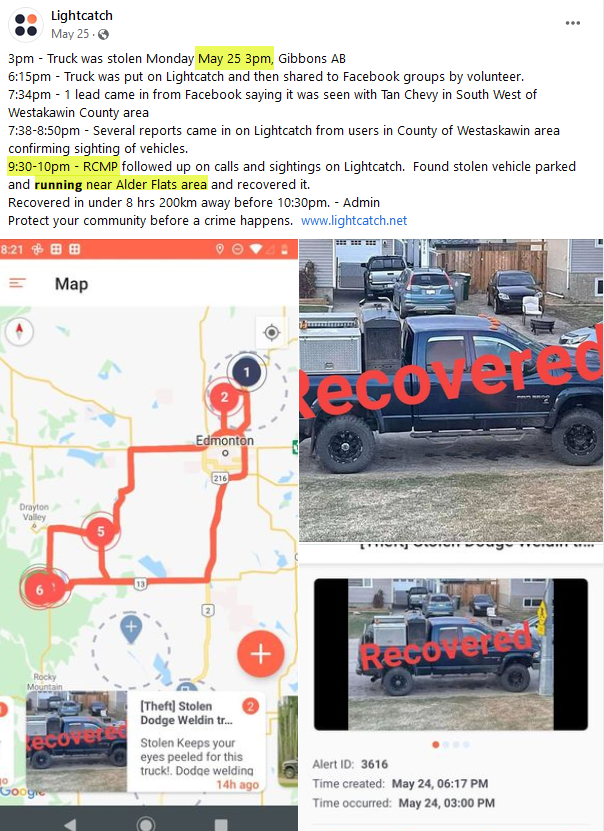 Unfortunately, the owner of this recovered truck lost all of their welding equipment and tools in the truck. None of those stolen items were listed in the goods that were seized 6 months later.

There were many more vehicles on the property before the investigation started.   The real number is  closer to 50 or 60 in 2021.  All 50 of these homeowners ended up playing this game with these criminals, whether they wanted to play it or not.  Every single one of them lost.

No doubt all of the 50+ victims heard from everyone else invited to this little party how sad it was that such a loss happened to them, the poor victim.

Meanwhile, the losses of the victims were keeping a system busy. That system takes tax dollars and pays for Crown Prosecutor’s summer vacations, Judges early retirements, and Politicians retirement pensions. All of these ‘players’ end up at the same table, but only one ever ends up losing any money. The rest all leave the party quite financially satisfied. If a few more victims pony up before the event ends, why it doesn’t hurt the rest a bit.

Some may have to explain in a long conversation to a victim, that it really isn’t them who is responsible for their losses, that the real culprit is someone else, but that’s an easy routine to learn. The size of these salaries help make such a conversation manageable.

So many swear they will turn down an invitation to be robbed and abused at the hands of criminals, playing this game. In the end, there wasn't one prepared enough to avoid the security gaps on people's property they were exploiting.

We seen these thieves steal from all 50 of these victims homes and get away with it. Many of them likely had some kind of security they ‘thought’ would work. In the end, despite dozens of thefts none of the homeowners security led to a single vehicle seizure. The criminals were better players at this game than the homeowners.

Those who counted on their guns, or maybe dogs, or locks, soon found out the criminals weren’t playing that game, they were playing a different game, where people with those things are going to lose.

(In a survey of 2500 homeowners in 2020 we found people who had been robbed twice within 5 years were the least likely to trust dogs, guns, or physical security. People with real world experience commonly don’t trust these things.)

In the end, most just end up hoping they won’t end invited to this little soiree. Hope is not a good strategy.

After analyzing thousands of property crimes we found there were common gaps criminals were exploiting over and over again.

I developed a free quiz so any homeowner can identify issues with their security and resolve them using any vendors products. Go to score.lightcatch.net to get a free evaluation as well as steps on how to resolve any identified gaps.

The way to avoid paying the thieves at this table is to blast the next visit they pay to your home as fast, and as clear, and as far, as you possible can. Without an immediate and severe response, the odds quickly turn against you, just like it did for the 50 or more victims of this group’s crimes.

Like the often quoted saying by Warren Buffett goes “If you find yourself gambling and you don’t know who the patsy is, you’re the patsy”.

In other words, everyone at this table needs to have an edge. The criminals edge is that they know most homeowners move so slowly and are so disorganized it’s easy stakes. They also learn any arrests are a long time coming.

The Crown Prosecutors, the Judges and the Politicians edge is that they know, that no matter who wins or loses, they get a nice fat pay cheque on a regular basis.

What’s your edge? Or is risking being the patsy ok….