Trailer Theft-Why Some Lose and Some Win

If you never, ever, want to see any expensive trailers you own stolen this case study is for you.

I’m going to compare the theft of two enclosed double axle trailers that were both loaded with valuables stolen from the same city. One was recovered in 24hrs. The other looks to be a complete loss.

The reason why the two had such wildly different results comes down to some very simple things.

That is exactly what the owner who has not found their trailer did.  Here is their story told with their own words, some of the details have been removed. 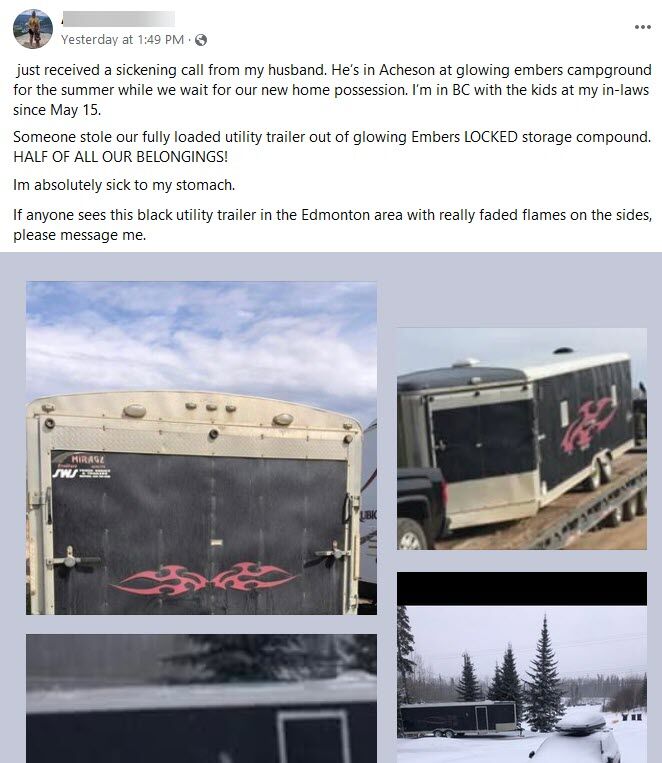 I run into people like this person who are sick at their stomach too often.

One woman who had their buildings in the country well hid behind a group of trees and had locked gates and bars and at least two dead bolts protecting the doors of the shop where there holiday trailer inside was kept was also devestated. I remember how she could not bring herself to even call the police for several days. Just dealing with how violated they felt was so hard it took that long to admit this kind of a loss had happened to them.

Another friend dropped their holiday trailer off just before leaving at a Tire shop with instructions ‘don’t leave this outside.’   One night of the two it was left there the shop did leave it outside and that night it was stolen.

That was the end of our friends holidays. They ended up losing a pretty good amount of money on this even though they had good insurance.

How to Stop it.

This stolen trailer below is much harder to spot. It is smaller, has no special decals and is just plain white. But it was recovered within 24 hours in a city of over 1 million people that happens to have one of the highest crime rates in the province right now. Why?

The pattern of why this was recovered and the other one wasn’t is very repeatable pattern.

The owner of this trailer had a security system that did what 90% of most home owners security cameras won’t do. It actually provided useful video. Most home owner’s security fails them when it is really needed. In fact, the popular security camera’s on the market today correspond to a really significant increase in crime.

I got so tired of seeing property owners not ever being told where their blind spots were I created this free self-assessment to help people learn what criminals were going to do to steal from them.

If you want to remove the blind spots, protect your loved ones safety, and avoid the pain of loss like the first person experienced, the free report that comes with this quiz can change that.  Learn more.