How will I know when it is time to have the baby? That was the question my wife was asking several hours after being in the hospital delivery ward for the first time. It seemed like a good question to me. Our first child, later named Samuel, was over one week past the due date and neither of use knew what to do next.

The nurse replied there is a way they can tell in a certain cry of the mother when it was time to have the baby, and they will be there just in time. This all seemed mysterious to Damaris and I but everyone was healthy and happy and we just took it at face value.

Later, I had a pretty good idea what the nurse was talking about.  After having six children, I knew exactly what the nurse was saying in regards to a ‘certain cry’, and I came to really respect her wisdom in the way she handled that question.

Fast forward a few years and I’m now dealing with people in cities and communities who are really frustrated with the kinds of crimes that are happening. I’m dealing with other kinds of people who would like to see improvements in the safety of their community, yet they find their efforts are like pushing on a rope.

Once again, I’ve learned there is a ‘certain cry’ people make when they’ve reached a really high point of frustration with what is happening in their community. I feel like that nurse taught me a valuable lesson. If that cry is there I’m almost certain real change will take place. As soon as that cry dies down, I’ve got a pretty good idea very few people are going to do anything proactively, simply because the pain level isn’t high enough.

Which brings me to the ‘official crime statistics’. The FBI in the US and RCMP in Canada both report property crime is down over the last 20 years by so much percentage and it looks really impressive.

This may seem like a triumph of good policing and expert political guidance that created just the right laws to stop crime and keep everyone safe. But wait, what are these rants and frustrations I keep seeing online over and over again. I think I detect that ‘certain cry’ coming from several places.

Take Bicycle theft. Officially, the FBI reports that there were only 157.668 bicycle thefts in the US in 2019. Anyone that believes that number is true, has never spent any more time around victims of bicycle theft than my wife and I had spent in the delivery room before our first child. 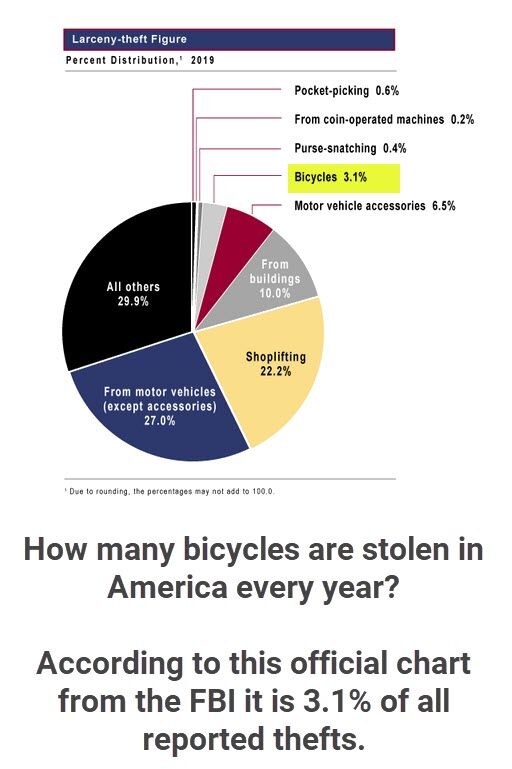 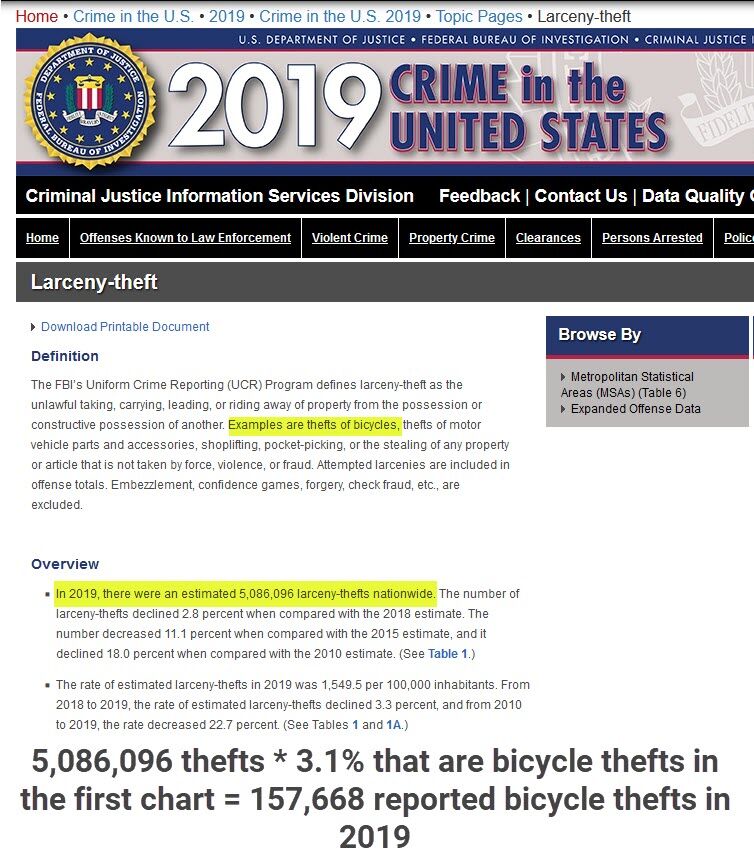 529 Garage, a bicycle registration service used by several major cities in North America, reports that in the same year of 2019, bicycle thefts weren't 157,688 as reported but they were at least 2 MILLION.  They estimate people lose a bike to theft once every 30 seconds. Their research comes to a number over 10 times BIGGER than the official numbers. The study from 529 Garage of 2 million starts to match the ‘certain cry’ I hear online. 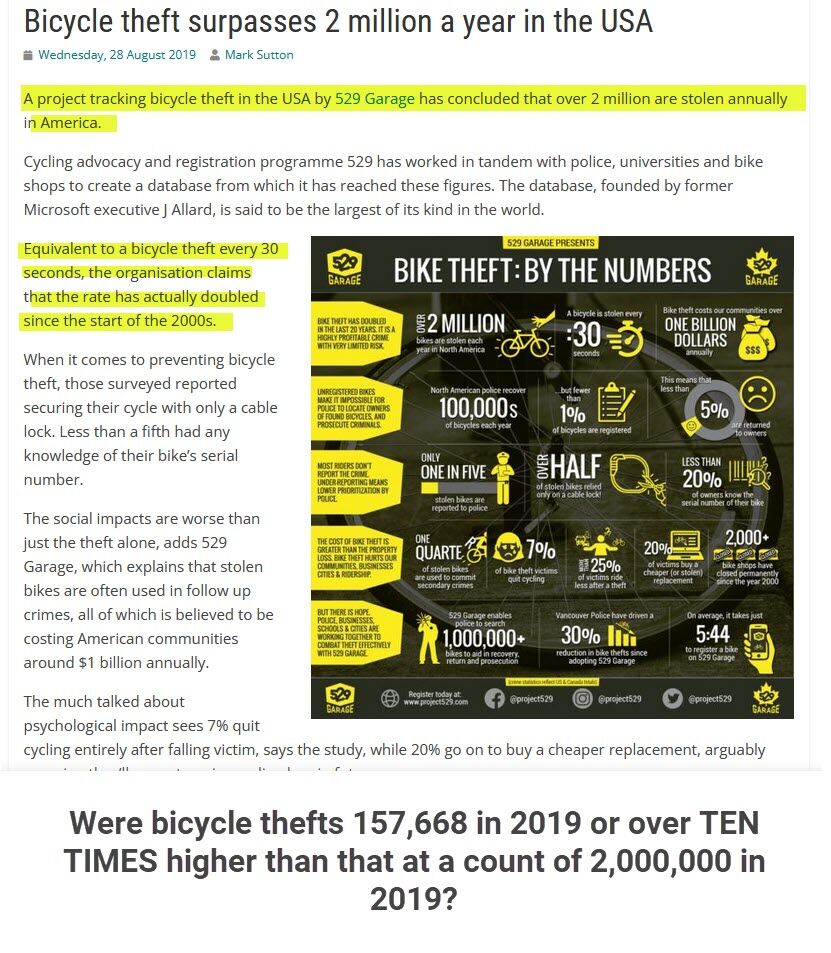 Reports like this CBS headline below helps confirm the problem is much bigger than the 157,688 stolen bikes reported and that it is getting worse.

By Megan Cerullo October 20, 2020 / 10:16 AM / MoneyWatch “Edit Nagy, a Harlem, New York-based general contractor had her third bicycle stolen from New York City's streets last month.“ .... ” Still, the crime stung. "You really feel like you're punched in the stomach. I couldn't sleep for a few days; I just felt violated," she told CBS MoneyWatch"

Officially, FBI crime statistics over the last 20 years shows a drop of 2 Million ‘Larceny-Theft’ crimes that is the category bicycle thefts are put into. 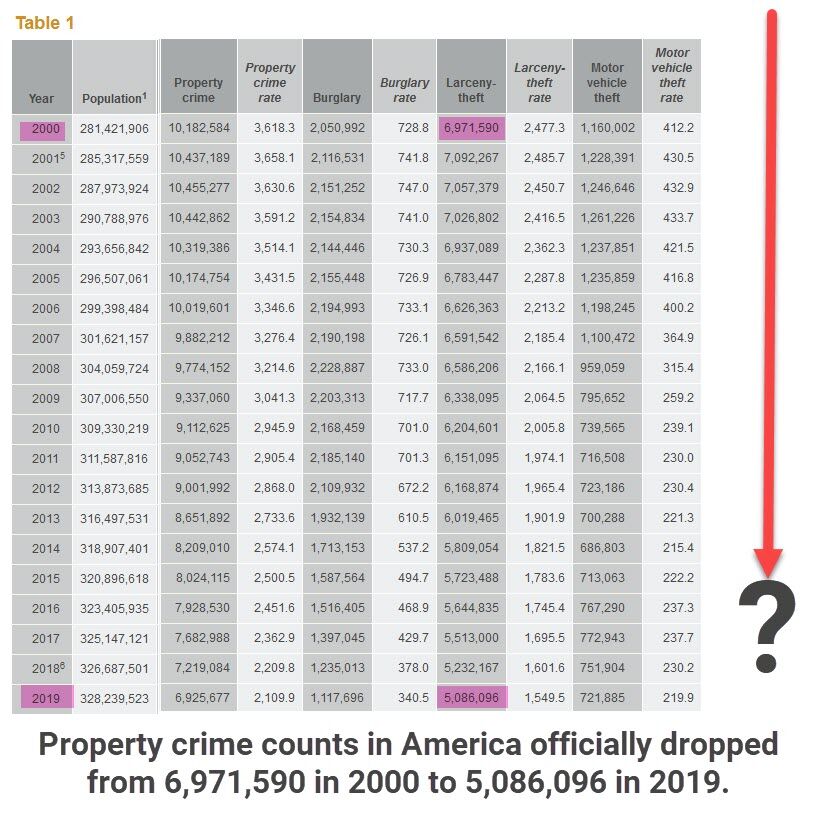 Once again, this looks like a triumph in community safety. But if there are actually 2 Million bicycle thefts and not 157,688 like officially reported the real crime rate that people are living with today is not lower, the true crime rate is actually higher than 20 years ago! 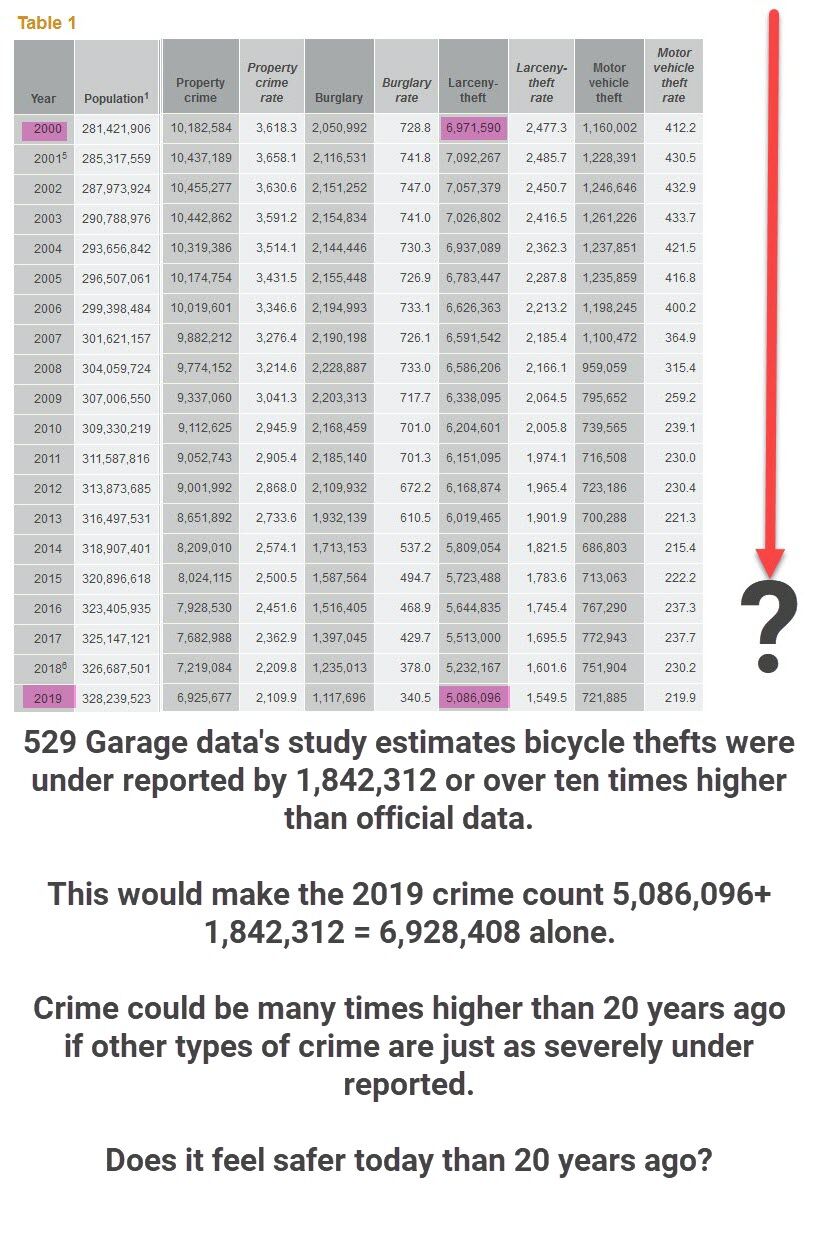 I am very confident there is a huge problem of under reporting today. Most police officers I’ve heard discuss this subject have similar sentiments. I suspect that under reporting existed 20 years ago, but that the problem was not as widespread as today.

Another example of massive under reporting today are the estimates that 389,000 packages are being stolen every DAY across America or 143 Million packages every year, like this NY Times article reports. If 143,000,000 package thefts were added to the estimated 6,000,000 million property crimes in 2019 it would show the crime rate would be over 149,000,000 or twenty three times higher than the official crime rate seen today.

Crime would therefore not be lower than twenty years ago, it would be significantly higher.

People ask the question after experiencing breakdowns and let downs in the justice system and ask ‘What good are the police going to do?’ Unfortunately there have been ineffective answers to this question too many times.

Think for a moment about which of the people you know who would call the police about a package theft.  I would hazard a guess people who have only had one or two packages stolen are ones who make that call.

Fuel thefts, car break ins, tool thefts and now catalytic converters are also likely to be under reported for the same reasons. It looks to me like all of this under reporting and the drops in the reported crime rate represents one sure thing.

Instead of Waiting For Someone Else

What if the property owners were empowered to be able to protect themselves better? This sounds dangerous, but what if property owners had the ability to easily deliver a burden of proof that the courts could not turn away.

If a home owner could deliver video proof of a crime to both the police and the public that led to an immediate arrest this would all add up to a much higher level of proof being delivered to the courts than what is seen today.   Over 90% of all property crimes do NOT have this level of proof in our estimates.

Imagine if 90% of the property crimes had clear colour video of the suspect, video evidence of the crime, and then the community helped locate the suspect so quickly for the police, that an arrest could take place within 30 minutes? Technically and economically there are no barriers to this happening right now.

Imagine if the press could release videos of the same suspect committing one, then two then three crimes and then always being arrested within 30 minutes after doing these crimes?

A Judge or Crown Prosecutor who did not properly deal with a criminal of this nature would risk their own career future. Today with as little as maybe 10% of these kinds of property crimes having this kind of evidence, there is very little oversight into the quality of the decisions these parties are making.

An example I’ve used to illustrate the difference and effectiveness of this approach is around the tragic death of George Floyd. The video of his treatment and the undeniable evidence and then the tragedy of him dying, was the catalyst that created the movement. The policing services and the court services had no ability to sweep his case under the rug as the public demand for action was too high.

Punk Rock and Rap May Have Ruined Me

I used to like both punk rock and rap music as a young man. Metal too. Basically if it was rude and coarse and loud I had a smile on my face back then. I don’t like any of that stuff today, but those influences may be still lingering and that is what causes me to write something below that may sound brash and loud and maybe rude to some.

We are likely to meet one of two ways. Sometime in the next ten years over 1/2 of the readers of this post will experience a crime over $5,000 according to Statistics Canada. If you do nothing with your property security today and end up being a victim down the road, we’ll likely meet online as a desperate urgent cry goes out for someone to help.  If the crime is big enough I'll detect a 'certain cry' and it won't be enjoyable.

At that point what you don’t want the public to say is “Wait, if a property owner who has a home worth several hundred thousand, vehicles worth over $100,000, toys and bicycles worth tens of thousands, but they didn’t invest in the right kind of property security for as little as $70-$120/mo whose problem is it when they are frustrated about being a crime victim?”

The other way we might meet is you leverage the right technology to stop crime on your property before it even happens.

After studying 10,000 property crimes I saw clear patterns that were allowing some property owners to live worry free when it came to risks to their loved ones and property.

I applied those lessons and created an innovative self-analysis tool so any home owner can learn what flaws might be present in their home security.  You can take the quiz here.  score.lightcatch.net

Do you feel safer today or 20 years ago?  I would love to hear your feedback below.