The first thing that caught my eye is that the report said a search warrant had been issued and a team of police had closed Highway 41 for five hours. Why does a Highway need to be closed for five hours to arrest just one person I wondered? After the day was over, Jeffery Fendelet (47) had been charged with 36 crimes.

Exactly one year ago, in June of 2021, a team of police arrested this same man.  At that time he was served up 12 similar charges. I guess the Judge in Bonnyville didn’t feel the last 12 crimes required any consequences from the law. He was let back out on the streets to hurt some more people.

We’ll see if the running total of 48 crimes in less than 13 months, is now enough for the good Judge to consider this person to be a danger to society. Or perhaps the Judge prefers to have Bonnyville residents suffer a little longer. Maybe after 60 or 70 charges are piled up, and perhaps someone getting killed, will the case be taken more seriously.

Bonnyville has had the worst crime rate in the Province in both April and May 2022. Just look at what the people are going through in that region. 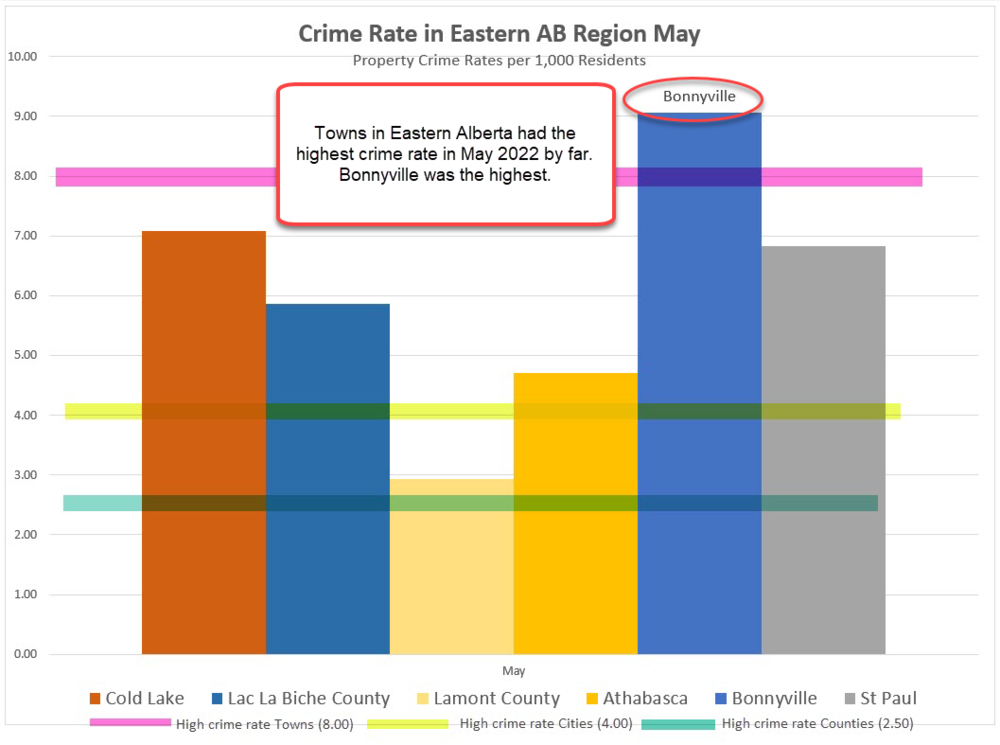 Residents in the Town have had to live with a crime rate 2-3x higher than people who live in the City of Edmonton or Calgary ever deal with. Welcome to small town Alberta, where too often homeowners pay for crime more than anyone else.

Compare the pink bar of a high crime rate in the first chart to the level of crime in cities in the same month. 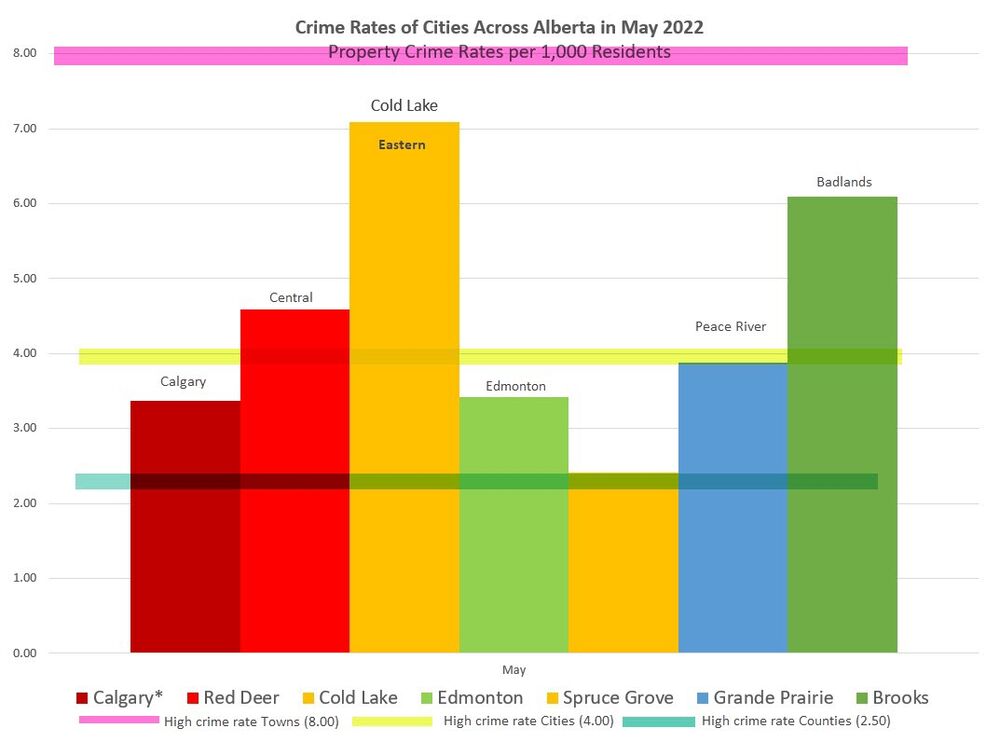 Ever See a Judge Squirm?
(They Squirm in a Calm Way)

Albertans do not need to suffer being the next victim against someone as dangerous as Fendelet. The way to make a Judge squirm in fear of not enforcing the law, is to make them worry about their career and their political future. The Judge needs to feel they have no other option than to prosecute the law.

Can someone influence a Judge? Most of the time a Judge won’t even speak to anyone about the law, let alone an actual case outside of court. Yet despite these obstacles, influencing a Judge can be done, it is perfectly legal and very satisfying.

The way to make a Judge squirm about your case is to have such clear video footage of a crime and then have an arrest take place almost immediately.

Then to help turn up the heat on the court system, share the excellent video of the criminal on social media and with the local press. The public loves to see a criminal be made publicly accountable.  They will be all too happy to play along.

This footage will get around and will be almost ‘buzzing’ in the Judge’s ears when the case comes to trial.

Where most people don’t get these results is because there is no arrest right away.  Without the immediate arrest, there is a much weaker case that the video is actually the criminal. These factors water down the effectiveness of the justice system tremendously.

When an arrest takes places immediately, at the time of the crime or just afterwards, plus there is positive clear video shared widely, there can be such overwhelming evidence that the defense lawyer doesn’t have a lot of leverage to get the charges dropped and the case thrown out.   Neither will the Judge want to risk their reputation, even if the government has given them some secret agenda to not really truly enforce the law.

If They Only Knew

Almost no Judge would have had the nerve to throw out the case of the tragic death of George Floyd. Filmed in Minneapolis, in the custody of several police officers, and declaring he couldn’t breathe, he passed away after being held for over 9 minutes in a dangerous position. The shocking video of the event was exploding on Twitter the same day of his death.

Even if the Judge was the most bigoted person in the world against black people, even if he was the secret head of the Klu Klux Klan, that case still had to go to trial or that Judge’s career would have been over. The police officers involved also had to be charged, because the the tragedy had become so visible.

Most property owners fail at getting similar kinds of results because they almost never get all of the pieces of the system to work together fast enough. We’ve found that to have the system work at this speed, more than security cameras are needed. The average owner of a security camera system is not able to report a crime on their property in under eight hours.

The right kind of home security costs most home owner's under $100/mo. The items needed are also available from numerous vendors.

Others Living With FOUR Times Less Crime Per Resident

Places where some of these principles have been applied for a few months, had a crime rate between 1 and 2.40 per 1,000 residents at the same time when Bonnyville had a crime rate of over 8.  This was almost four times less crime per resident.

Imagine if everyone was experiencing four times less crime! It is happening for some property owners right now.  It is possible.

If you are a homeowner and would like to know if there were might be holes in your home security that someone like Fendelet could use to get away with crime I created a free assessment. It is not technical and takes most people about 1-2 minutes to complete.  Go to score.lightcatch.net to get this assessment.

You'll see recommendations that the police will love, that can make judges squirm, and that can make criminals scatter like cockroaches when the lights are turned on.  score.lightcatch.net

I hope you can help get this message out. Making a Judge squirm is far too satisfying to keep this to ourselves. 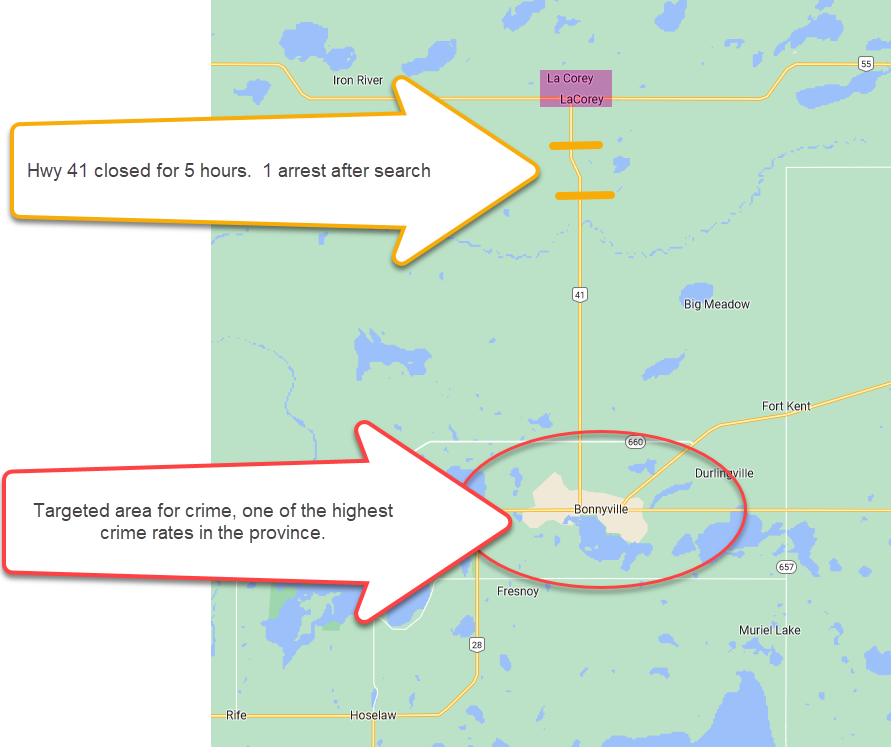 Thanks to Lakeland Connect for the source of the story - https://lakelandconnect.net/2022/07/01/la-corey-man-charged-offenses-following-execution-of-search-warrant/

Previous 1.3 Million Dollar Homeowner Shocked When They Are Theft Victim
Next The Most Dangerous Cities in Alberta During June 2022