The Most Common Mistakes Made With Security Cameras

These common mistakes create invisible flaws that cripple the safety of a home.

Mistake #1 – Relying on Security Cameras For Your Home Safety

In over 10,000 property crimes less than 300 had clear footage of the suspect and the crime.

How in this day of hi-tech can it possibly be this bad?

The amazing thing is that we have clear proof that good video, plus pictures, plus a clear description leads to 500% better outcomes in terms of both crime prevention and theft recovery.

The difference in having good video helping to keep people and property safe is enormous.  If only more had video that was useful.

Relying on Cameras Is  Connected To Frustrations With Crime

The problem may be even worse than it seems.

The NY Times and 529 Garage both conducted studies that found the crime rate was 20-28 times higher than what was being reported to the police.

529 Garage is an organization that registers bicycles and that operates in almost all major US cities.

They measured bicycle thefts in the US and found the real number of thefts was not 159,000 but 2 Million.

The NY Times examined the volume of package thefts from homes.  Their studies show property crimes were not 5 Million but package thefts alone were adding up to 139 Million per year and climbing!  Safewise and other organizations found the numbers may be close to double that, at 260 Million.

Together, just these two types of crimes from the NY Times study and the 529 Garage study add up to over 141 Million property crimes per year.

The chart below compares their findings in yellow to the official FBI data in orange. The studies point to the real crime rate being 28 times higher (141 Million+) than the reported crime rate (5.3 Million). 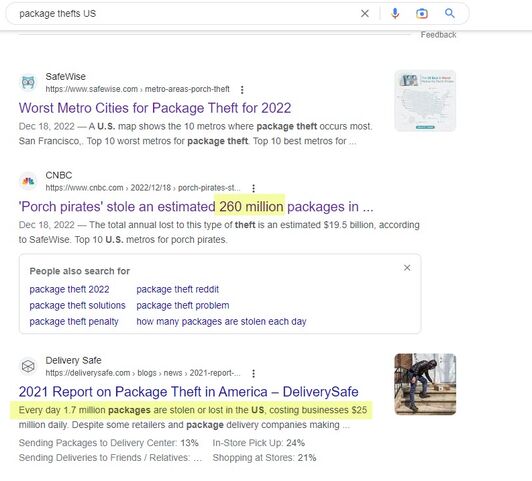 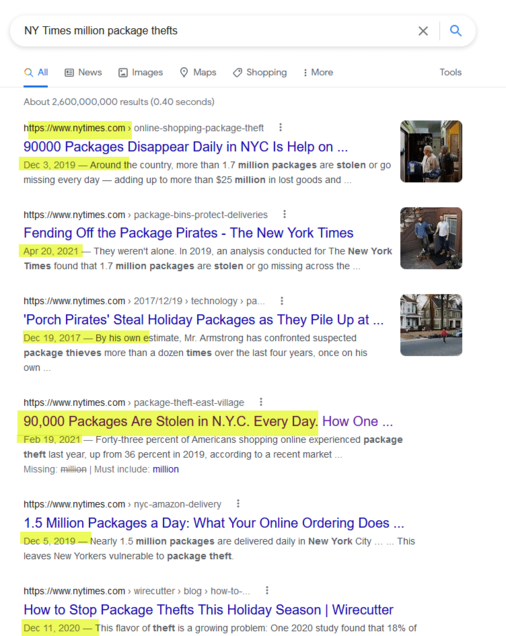 A sample search using the words package theft US. One of the links from Simplisafe reports package theft was expected to reach 260 Million packages in 2022

What Does the Crime Rate Have To Do With Security Cameras?

In 2014 Ring cameras were released.
In 2015 Nest cameras came out.
A flood of cheap cameras followed.

For the first time, the public could quickly setup a camera and then get alerts to their mobile phones.

Today, under reporting of property crimes to the police is happening as much as 28 times more often than it is being reported.

To me, the reasons why this is happening are very logical.

If you have ever talked to someone who took the time to report a crime, forward their crime footage, and then report every update they got to the police, all to have sweet nothing happen, you know how they feel about this topic.

They feel that the police don’t do ‘anything’ or at least they don't do enough.

These feelings lead to a reluctance to ever want to report another crime unless they really have to.

I showed this chart to a Peace Officer just after creating it, to ask if I was out in left field with me implying that cheap security cameras are closely connected to an increase in under reporting property crimes.

He described to me his feelings how that as a University student he had his $3,000 bicycle stolen.

He didn't have much at the time and cared about this bike.  This led him to doing all the right things, and he may have even found the location of the bicycle at a local pawn shop.

The police never even visited the pawn shop to investigate.

When the police did nothing to get his bike back, he remembers very vividly how it felt.

It felt one sided to do all that work, spend all that time, to have no one on the other side lift a finger to help him.

Years later he became a Peace Offer and knows the value of reporting crimes in assisting with crime prevention.

At the time, his feelings were very different.

If the average crime takes 10 minutes.

And your property only has 1 crime in the next 5 years.

If just one crime happens in 5 years that leaves a 1 in 262,000 chance of seeing that alert on your phone while it is unfolding.

To get a feel for how this might look, I took an Excel spreadsheet and painted cell 1 black and cell 260,000 black.

I then pasted that image into powerpoint, word and an image editing tool.

No matter where I pasted it, I still could not find the red cell.

Here is a similar image but it only has 1 pixel out of 640 pixels red.

This is what spotting one 10 minute crime within 4.4 days looks like.

Finding one alert about a real crime every 5 years would be like putting 414 of these white bars end to end and only one of the 414 bars having the little red bar.

Put this way, it makes finding a crime alert within the 10 minutes it is happening seem impossible.

Even More Data On Why Relying On Cameras Is Mistake #1

Ask yourself or others ‘Do You Feel More Safe Or Less Safe Today Than You Did 10 Years Ago?’

Critics to this questions will say people have always felt crime is on the increase ever since Gallup started doing surveys on how people feel about this topic in 1989.

That is only half the picture though.  These same surveys also show people  feel crime is increasing nationally but tend to agree crime in their community is often lower.

Yet today, a majority will say community is not lower but higher.  People's feelings have changed about this subject.

I also have a hard time believing that year in and year out, the majority of respondents were wrong and the data was right.

People are not that stupid that the majority will answer the same question wrong every time for 30+ years.

Suggesting people are just misinformed and the data shows they are now safer  contradicts all sorts of studies that show there is an incredible depth of wisdom in a crowd when that crowd engages in a subject they care about and they know even just a little about.

Residents of a community qualify on both of these criteria.  They both care, plus they know enough of what is going on to be reasonably well informed.

As I've shown earlier, the data itself may be what is really wrong when it comes to property crime.  Independent, qualified studies reported the data was between 1000% to 2800% percent wrong.

It is estimated that 25-40% of homes now have cameras.  Most businesses that have a physical presence also have security cameras that send alerts to someone’s phone.

Despite all of these increases in alerts, people feel less safe in their own community.

If getting alerts to your phone was so effective, people should feel far safer today than they did 10 years ago when this wasn’t possible.

Instead, the opposite is true.

Security Cameras Also Appear To Be One Of The Root Causes Why 80% of Thefts Are Reported Over One Hour Late.

No one ever wants to report a theft late.

Over 80% of crime victims can't help it, they report over one hour late anyway.

People getting security cameras alerts to their mobile phones tend to get so many false alerts, they end up ignoring all alerts.

When people get in a habit of ignoring all alerts they miss that one real crime that takes place amidst so many false alerts.

Ignoring the alerts is one of the biggest reasons why criminals get at least a 1 hour head start from police over 80% of the time.

Summary - Relying On Cameras Is Mistake #1

Based on the national crime rates, the logistical gaps of being able to respond to an alert, the subjective feelings of the majority of people, and the data within Lightcatch’s database of crimes, I can say with confidence that relying on security cameras alone for your home safety is a bad idea.

Cameras are isolated systems that leave people alone and vulnerable to be effective.

Mistakes 2 through 6 cause security cameras to be even less effective.

The Most Common Mistakes Made With Security Cameras #2-#6 >