Is the yard down the road the issue?

How do you tell if the yard down the road could be where the problems are? We found an easy way. But our method of finding this out is a little unconventional. Hopefully you can help keep it a secret just between us.
Here is a starting point (with hints on how to tell)

So what does that tell us about the yard down the road? An awful lot. But first, check this out.

Crazy thieves on the loose for months stopped in 8 hours

Theives in this vehicle had hit several places in Yellowhead County and Parkland County Alberta over several weeks or months Dec 2020 -  Feb 2021.

But the same day someone used a couple photos of the criminals and put a good description on Lightcatch a surprising thing happened.

Within 8 hours three thieves were arrested and the vehicle was seized.   It was hundreds of kilometers away but criminals can’t outrun the speed of light. (Lightcatch!) 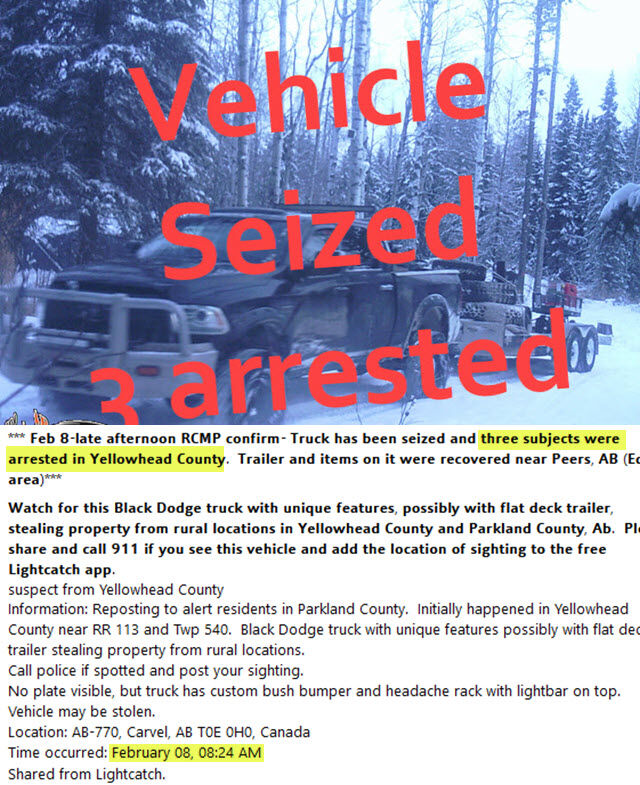 The best part of this story is that the thieves were caught in the vehicle and inside were several stolen items. Speed like this, makes the charges stick. In court a lawyer can't say something like“They don’t know how those stolen items got in their home. Their uncle might have put them there as he was over the night before.”

Let’s summarize. If a property owner takes a long time to report the incident and repeat offenders, mixed up in drugs, can’t help themselves, more homes will be broken into, more people will be woken in the middle of the night from crime, and more things will be stolen.  People will fall into a cycle of doing crime, get arrested, get off the charges, and continue on. Why would those profiting from this behaviour change the system?

So the yard down the road could be exactly where the problem lays!

Those property or business owners, who don’t do anything to help protect their community are enabling repeat offenders to operate in their neighbourhood. The whole crime ecosystem can continue because everyone is expecting the police and insurance to take care of the issue, instead of the people in that yard.  But the issue is so addictive, so easy, and so profitable, the police can’t keep up.

And when property owners don’t have the ability to alert the public quickly and accurately it actually creates a snowball effect. Time and time again, when a crime is allowed once, it enables a crime spree. For example, a stolen vehicle is used to do more crime in nearby areas and then dumped. So not reporting a vehicle theft quickly isn’t just the cost of the vehicle. That vehicle theft could be used for 2-10 more crimes, sometimes even in the same night. An addict who steals one bicycle, pawns it, and gets the next fix, is now enabled and emboldened to do much more.  Reporting to the public slowly, enables the drug dependent and the repeat offenders to stay in the cycle.

Together, you and I as Lightcatch app users, have proven that 87% of thefts or more can be stopped. What we need is to have the issue down the road changed.

All we can do at this point is show the yard owners down the road how much them not being involved is costing everyone. Recommend they download Lightcatch and report any activity quickly to change the issue.

Someday soon insurance companies will have better data on who is a good citizen and who is liability. If you and I can’t convince the yard owners down the road how much they are part of the problem someone hitting their wallet probably will.