How to get your stolen bike back

Over 24, 000 have reported stolen bikes in Toronto over the last 7 years. In this recent article from the Toronto Star the author includes the experience of their two bikes being stolen, a Toronto City Councillor’s, and many others.

I’m going to outline how to first stop bicycle theft from happening. Then I’m going to cover how get a stolen bike back faster and easier.

First, stop crime before it even happens

Below is a sketch that outline’s how David’s bike could have been prevented from being stolen. I made some guesses on what the property looks like based on what was in the article.

The porch where the bike was left was unlocked at midnight. Even with this human error of having a door unlocked, this crime was preventable. 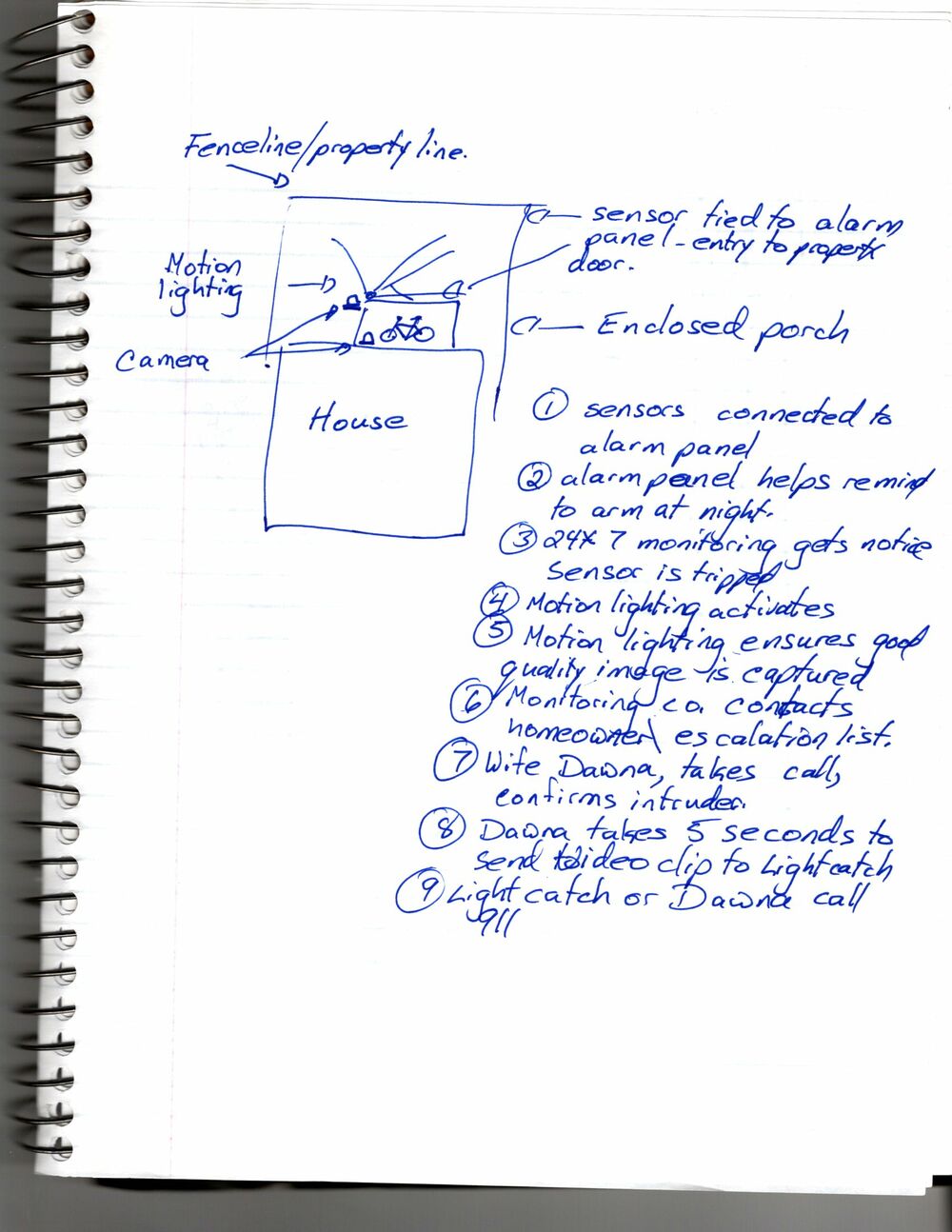 Since Dawna was awake at midnight while David was sleeping, it would have been Dawna who first responded to a call from a 24x7 monitoring company, that there was an alarm sensor go off on their property.

Suppose everything in the above diagram isn’t possible. Perhaps a perimeter sensor in the front yard or fence line isn’t practical. Perhaps other things didn’t work as intended. There are still several layers of defense in this sketch that could be used to stop this theft before it happened.

a) The alarm panel could be activated and the doors locked on schedule with an alarm system.

b) An alarm panel app could have reminded them to both lock the door and arm the alarm panel if there was no schedule.

c) If an alarm panel was armed, an intrusion sensor on the porch door and or the perimeter of the property would have been tripped.

d) The motion lighting may have made the criminal uncomfortable knowing their trespassing is very well lit. The lighting would improve the video quality of the security cameras. (I didn’t draw a doorbell camera because the data we have shows they are not good enough to stop most crimes.) A higher quality camera, placed in a spot where the suspects can be properly filmed, sends a further warning message this home is protected in a professional manner.

e) Assuming every system above fails, the camera is a final layer of defense. The cameras, with proper motion lighting, and a good AI filter, would have detected a human on the property. The camera app would be configured to alert the homeowners of human entry. Dawna could have gotten that alert from the exterior camera, to her camera app, as the criminals were entering the yard.

f) Dawna then opening the camera app to see the alert and then seeing the intruders on a porch camera steal two bicycles, could have taken 5 seconds to send that video clip to Lightcatch. The app would have process this email and send the video, the location, a description and images to every app user within 5 km.

Lightcatch is a free app used to protect your community. It has no advertising and every entry on the app is anonymous.

Once the alert hits Lightcatch, Dawna and or the Lightcatch Operations team, would call 911.

Everyone using this free app, including any police officers, would instantly see the video of the theft, the precise location of the crime and the precise time it is unfolding.

Even if Dawna did call 911 immediately at the time of the theft, she can only provide a verbal description of the bikes. The chance for error and wasted resources from her phone call into the dispatchers text description are so large it becomes very difficult for police to get the results a victim wants.

Multiply these issues by thousands of property crimes, and you have a system that allows addicts and repeat offenders to stay in business. Information flow reaches police services too slowly, is of such poor quality, and is so lacking in confirmation of the facts there is little any team can do.

No one in policing wants to report to their superior at some point “Yeah, I spent a couple days tracking down a stolen bicycle and just couldn’t find the guy.”

How to get the stolen bike back

Let’s assume two community members have Lightcatch and see the request for help after Dawna sent it to the app. The next steps could look like the sketch below.

The second and third sample updates are circled to show a route the thieves may have taken after stealing the bikes and how the community updates could have unfolded. 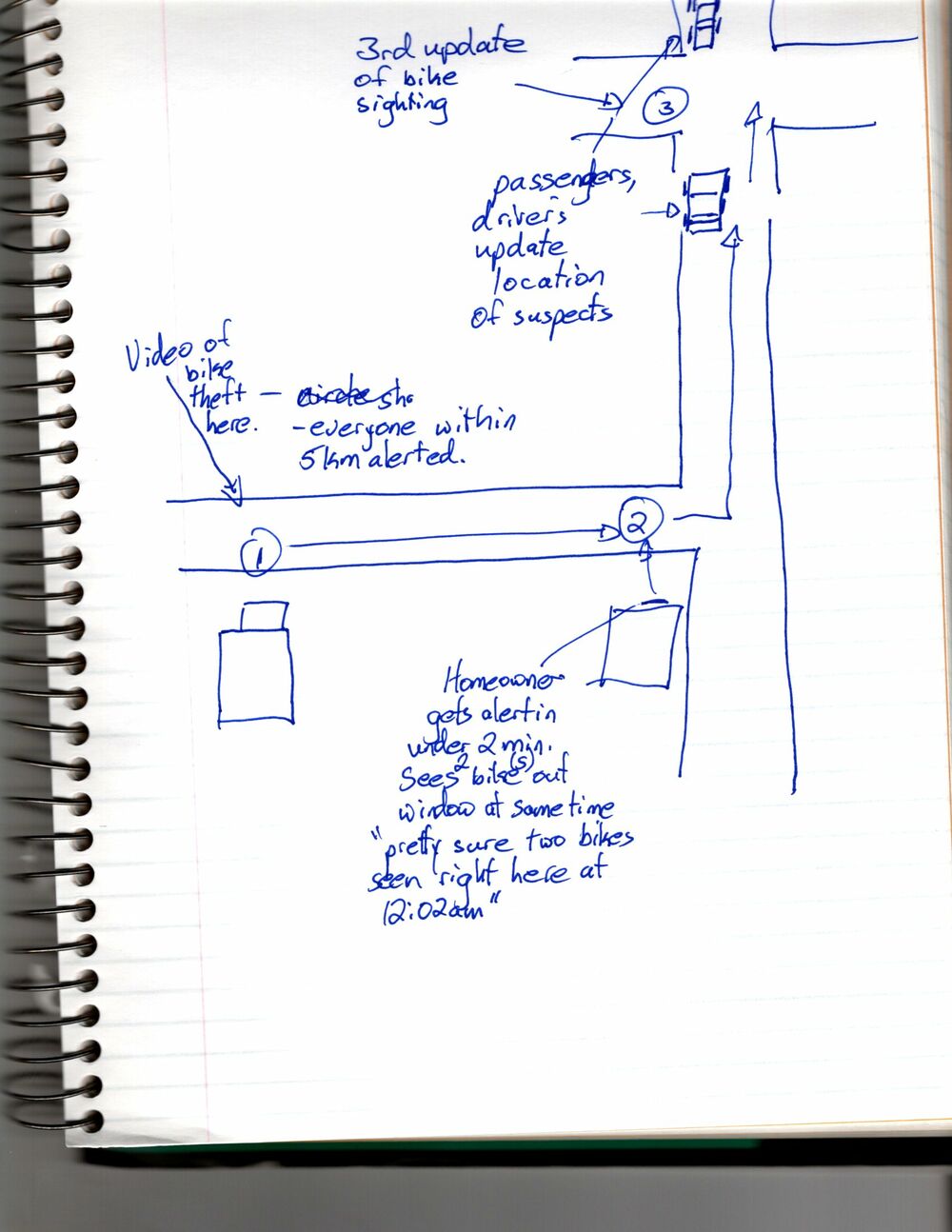 We have also cut down on several possible issues that prevent stolen bikes from being recovered.

1) If two community updates come in, police have even more data to work with. These multiple confirmations are validating the original report is real, it is unfolding right NOW, and where the suspect is moving to. These confirmations make deploying police resources nearby even more logical.

2) The Policing Operations team can access a dashboard of alerts on Lightcatch from their Operations Centre for free. The Operations Centre can use that map and their regular tools to help coordinate policing resources to that area in real time.

3) We have made the public more accountable. No one likes crime to happen to them.  Now the public can help keep their community safer.  Everyone within 5 km seen the first alert. They have also seen these two follow up updates come in. Each update is redrawing a new 5km radius to alert app users so even more people are being involved. This community engagement is reinforcing a message to others that “People around here are helping one another.”

4) This alert strengthen police accountability as well. A professional, safe, actionable alert is now in their jurisdiction. These alerts are an opportunity to perform. We have seen this kind of alignment of incentives lead to many successful recoveries.  Community updates after the original alert improve both police response and increase public accountability.

5) We have created much more intense visibility to a thief that this area is not theft friendly. Even in the event these suspects get away with these two bike thefts, the speed at which this can hit social media, the clarity of the data, the safety of the community because information is anonymous on the app, and the professionalism of the message creates a message that can help intimidate criminals into thinking “Don’t go there.”

Criminals friends will recognize them and let them know they had a very close call. We have seen several instances where criminals avoid communities because Lightcatch alerts are created there.

It is the lack of real time information from the homeowner of the theft, coupled with zero awareness within the community, on top of no real time data getting to the police, that creates an environment where someone can get away with a stolen bicycle.

Close these gaps and you can stop your bike from being stolen at your home.

Potential Reasons Why This Won’t Work

a) Less than 1% of thefts are reported in real time. Less than 1 in 1,000 homeowners have the right security systems to be able to get good video of a suspect.

b) Are the police in Toronto using Lightcatch? The answer is no. Most police services are instead relying on radio dispatch to find two stolen bicycles at midnight.

A homeowner can still complete all of these steps described and get tremendous results today. This process has been so effective 75% of all thefts reported within 1 hour across 3 other cities and 9 rural areas get successful outcomes with few of the policing services in those areas officially recognizing Lightcatch either. The recognition isn’t necessary for great results, though it does help.

Rather than wait for some top down endorsement from a police department, my recommendation would be to solve the problem of speed and quality of reporting at your home today. If you have that issue resolved, and then use Lightcatch to update the community, this will help stop crime in a tremendous way.

c) The iPhone version of the Lightcatch app takes about 20-30 seconds to view the update after you get a push notification. Perhaps community members, who are not affected by the crime would not have the patience to wait that long. This is a temporary situation and it will be resolved as soon as possible.

d) Some notifications on an iPhone can be hard to identify which alert the notification belongs to. A user may have to review 2 or 3 alerts to see which one was updated. Again, this is temporary and will be resolved.

In the meantime, determined community members can use Lightcatch to stop bicycle thefts and other crimes before they happen today.

The Toronto Star article covers how 529Garage helped lower bicycle thefts by 40% in the City of Vancouver.  I am proposing a system that can both eliminate bicycle thefts, as well as package thefts, and many other forms of property crime.  The 75% success in other regions over several months point to now being the time to see an even greater level of results happen.

If you still aren’t sure what to do try this

1) Download and use the Lightcatch app.  It is on the Google Play Store and Apple App Store.

2) Share the potential with people near your home. The more people who use it in your community the safer your neighbourhood will be.

3) If you want your home protected in the way we outline we have a service that helps oversee upgrades, installations and alerting in an effortless way. We call it the Homeowner Prevention Plan.  This service is designed to get what your need up and running in the next few days, no matter your location.