Lessons From 214 Stolen Cars Recovered In One Bust 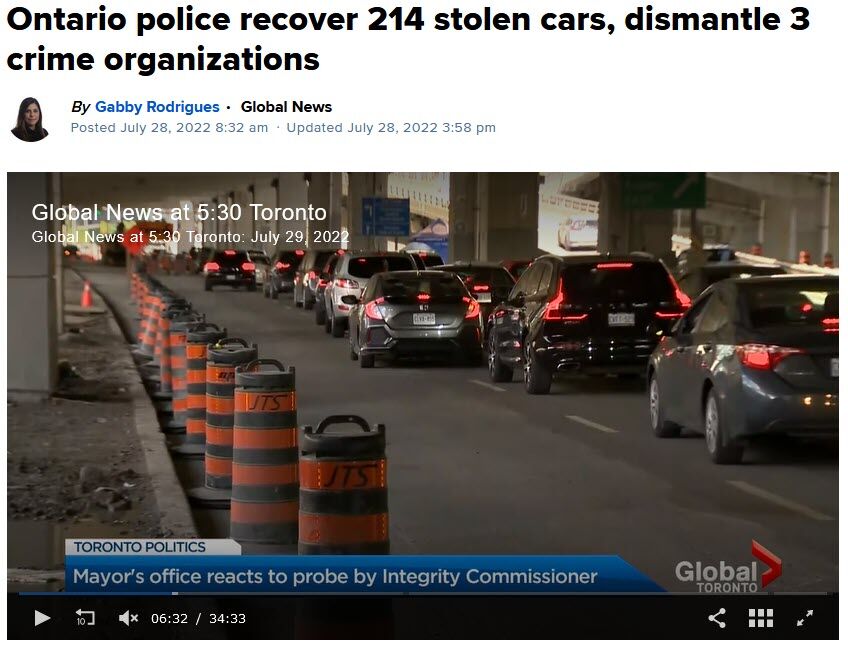 The Ontario Provincial Police announced on July 28 they had laid hundreds of charges against several people and broken up 3 crime groups involving the sale of hundreds of fraudulent vehicles.

This is a great asset to the safety of Canadians everywhere and is appreciated!

At least 214 stolen vehicles were recovered.

Taking 22 months to complete, it also means the thieves were able to steal these kinds of vehicles over and over during that time, as well as before the police got involved.

If criminals were able to manage stealing so many of these vehicles I think a good question everyone should ask is.

What kind of home security did these victims have to prevent this?

The majority of the vehicles were Honda’s and Acura’s.  This actually tells us quite a bit about where the victims likely lived and what they probably had for home security.

Most likely the owners of these higher class vehicles had the money to own a home as well as the money to afford some sort of home security system.

Judging from how many of the same vehicles were stolen, it looks like what ever home security systems were commonly used, they weren't very helpful.

Perhaps an even better question is. How satisfied were the owners of these home security systems before their car got stolen?

Suppose these people were asked - ‘Which of these answers below best describe your level of concern with the safety of your property?

I’m pretty confident that if the people who had their cars stolen could have been surveyed, they would have answered ‘satisfied’ the majority of the time.

Try it with people you know. Ask how satisfied they are with their home security. Most will answer “Well I haven’t had a problem lately, I guess it is doing pretty good.”

I would also guess more people would answer ‘delighted’ than 'frustrated' if a survey like this was done.

In my experience, it often takes someone being a victim once or twice, before they  start to realize the common approaches aren't very effective at all.  The evidence that  just because there had been no recent problems didn't mean they were actually safe.

What is really interesting, is that as I talk to new buyers of the Lightcatch Crime Blocker program, it is clear the majority of these people have a different approach regarding home security than the typical profile of an affluent Honda and Acura theft victim.

I believe most of our customers would answer the question to this survey as - ‘concerned and watchful’.

Crime Blocker is a combination of software, services, and support that eliminates  security concerns regarding criminals at your home.

Few of our Crime Blocker customers have been a recent crime victim even once.   They just think differently.  For example:

Most of the Crime Blocker buyers who already own a home security system have much better systems in place than the majority have, yet they still aren’t quite satisfied.  Their attitude towards risk management spurs them into action to take a decent solution and make it even better.

This sense of protecting what they have, becomes the motivation for them to buy protection before the need becomes urgent.

Very few of our customers have been really rich,  like worth tens of millions, if I were to take a guess.  Even though they may not be mega-wealthy, they are also almost always above average in terms of wealth.   (They don't tell us, but I do get to see the size of their house and yard.)

In a complex society with changing laws and norms, this makes a lot of sense.  They simply aren't trusting that things 'should work out fine'.  They are vigilant people who help ensure things do indeed work out to their benefit the majority of the time.

When I hear them talk I don't hear fancy terms about risk management, I think of their approach as just careful and one of not wanting to have regrets down the road.

I hope the information about the hundreds of victims touched by this recent bust, and  then compared with the attitude of our Crime Blocker customers, can help you decide where you stand with your home security.  Learn more.