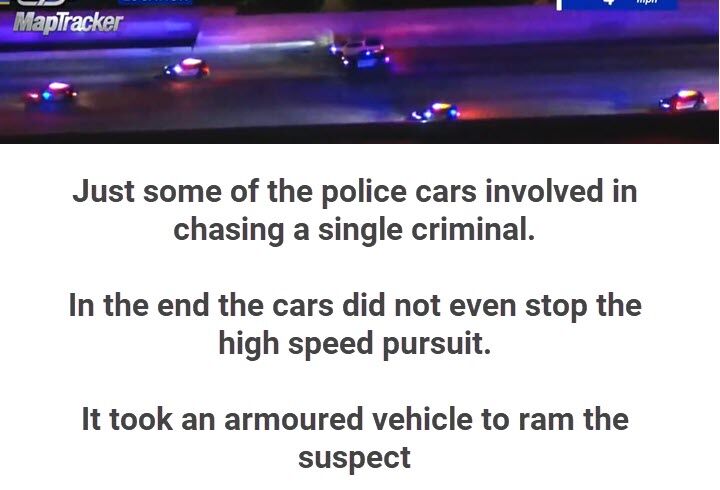 What does a drunken teenager running a stolen vehicle all over the road on Canada’s busiest freeway, as morning rush hour is taking place, have to do with a criminal stealing a construction truck in LA?

Yes, these two almost killed a few innocent people. Lives who have no way of knowing or protecting themselves while while someone is racing towards them into oncoming traffic.

Just one day after reviewing how a repeat offender came back to the property he had robbed several times, and then escape again going 170km/h to evade the police, these two near death experiences were in the news.

No one wants to pay for a criminals tactic of going as fast as possible with their lives. Yet it happens every day.

This may not have the right tone, but I would love your help. It’s a long weekend in Canada and I just know people are going to die somewhere for this exact same reason.  Each of us could possibly make an enormous difference in preventing this kind of crime from escalating.

If you could suggest to your friends and loved ones to get Lightcatch it could possibly save a life or a hospital trip.

A lot of people think ‘Oh, I’ll get the app if I ever have a problem like a crime at my home’.  The attitude of expecting someone else to get involved now, while they get involved later when it is convenient for them, is unhealthy.

It’s better for people to pay it forward a little bit and get involved before they have a moment of terror.  App users shouldn’t have to look at alerts more than 5 minutes per week so this isn’t a big ask.

The more people who use it, the safer our long weekends will become.

Read how a youth turned a stolen vehicle into a near killing machine here.

See the helicopter chase, listen to the News Anchor’s play by play drama, and watch an armoured vehicle ram the stolen vehicle here.